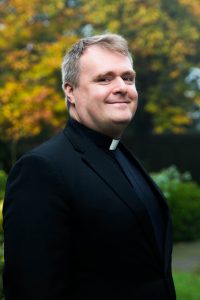 I was born in South East of Poland as a second of four boys and grew up in Domaradz where I received my primary school education. I received my secondary school education in Brzozów where I passed my final exams in 2003. That year I joined the seminary in Przemyśl where I did my philosophy and theology course and was ordained a priest in 2009. I have served as an Assistant Priest in Krościenko Wyżne until 2011. That year I was sent to England and worked as an Assistant Priest in St Francis in Maidstone until 2016. After that I was appointed Parish Administrator in St Simon’s, Waldersalde in Medway, Kent, where after my incardination to the Archdiocese of Southwark in April 2019 I was appointed Parish Priest. On 1 September 2020 I was appointed Parish Priest of St Thomas More Parish in Dulwich East where I am pleased to serve our parish community. 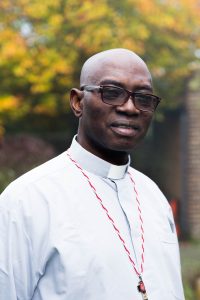 I was born on 9th June 1966 at Otu-Egunbe Kabba in Kogi State, Nigeria. I am the third boy in a row of eight children, made up of four males and four females. I started my primary school education at United Primary School Otu-Egube, Kabba but latter transferred to St. Michael Catholic Primary School Ogidi-Ijumu after the death of my father in 1976. After my primary school in 1980, I went to St. Clement Minor Seminary, Lokoja for three years but later completed at Community High School Aiyetoro-Gbede in 1985. I applied to the Holy Ghost Fathers for priesthood the same year.  I was ordained a Catholic missionary priest in 1999 after my philosophy and theology studies all done in Nigeria. My first appointment after my priestly ordination was to work in the Vocation ministry for two years. In 2001 I was elected as the Okura regional Superior of the Spiritans province of Nigeria until 2006. I latter worked as the parish priest of St. Peter’s Parish Abaji in Abuja Archdiocese from 2007 to 2011. I went for sabbatical partly in Venezuela then back to administration in Nigeria until 2013. I was appointed the Novice Director of the Consolers Congregation from 2014 until 2020. I arrived UK in October 2020 to begin my sabbatical and pastoral ministry as the assistant priest of St. Thomas Moore parish Dulwich East. I am very happy to serve here in this beautiful parish and pray that our stay together would produce mutual growth spiritually and holistically for the greater glory of God and the salvation of our souls. May the Blessed Virgin Mother Mary intercedes for us all now and forever. Amen.

You can also download the church's weekly newsletter at the bottom of this page, which contains details of forthcoming events, meetings and parish news.